Some blogs and social media users have claimed that former President Olusegun Obasanjo is married to a 22-year-old woman.

The articles about the alleged marriage were posted alongside the former president’s photo with reality TV star Cee-C.

Voice of Africa, a Facebook page with over 26,000 followers, had posted the picture with a caption that reads: ‘Former Nigerian President Obasanjo, at the age of 81, marries a 19-year-old girl’.

A Twitter user, who identifies himself as Alistar Chibanda, had also shared the post in 2021, saying that “Obasanjo (86) is marrying a 24-year-old.”

WHO IS THE LADY NEXT TO OBASANJO?

The fashion enthusiast was 25 when she was featured on the show.

Prior to her time on the show, the Enugu-born actress graduated with a law degree from Madonna University in Anambra in 2014.

First, there are inconsistencies with the age of both parties as speculated by blogs and social media posts.

Cee-C was 29 when the photo appeared online.

According to publicly available information, Obasanjo was born in 1937 in Ibogun-Olaogun, Ogun State.

The former head of state had married a few times. His ex-wives are Mojisola Adekunle, Stella Abebe, Lynda and Esther Oluremi. He currently lives in Ogun State with Bola Obasanjo, whom he married in 2009.

Now for the origin of the photograph: Cee-C posted the photo on Dec. 13, 2021, saying she was having a business meeting with the former president.

Corroborating this, Linus Okorie, a Nigerian leadership consultant and author, also posted a photo of himself, Nwadiora and the former president on the same day.

In a now-deleted post, Okorie said the meeting was preparation for the launch of Guardians of the Nation International (GOTNI), a non-profit leadership development organization. 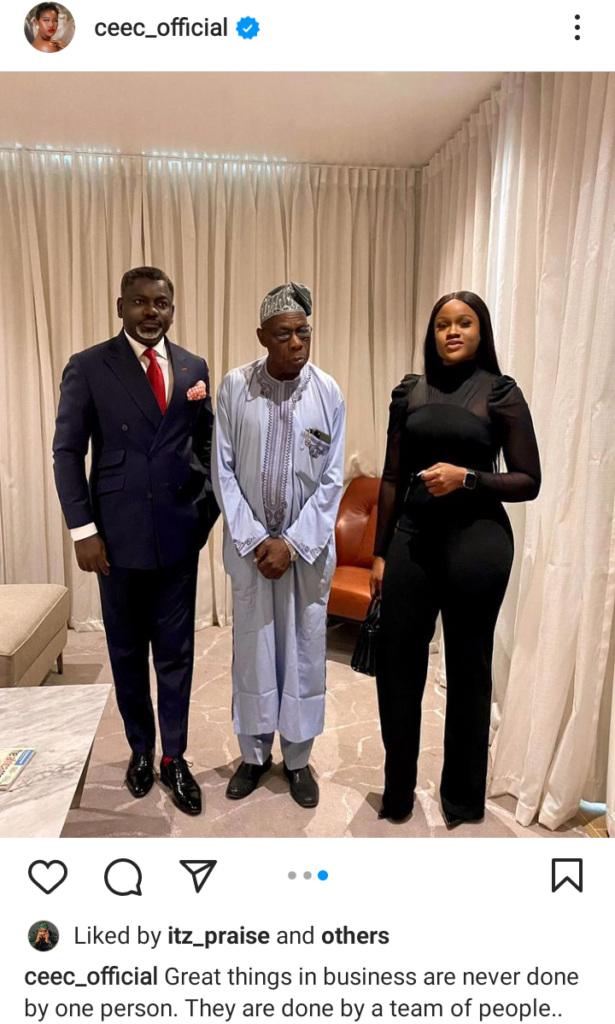 “We had a great meeting today with this great Nigerian Chief Olusegun Obasanjo, our highly respected former President of Nigeria,” he wrote.

“CeeCee, a brilliant lawyer and celebrity, was part of the visiting team. The purpose of the meeting is charging as the GOTNI Leadership Center prepares for its official launch.

There is insufficient evidence to prove the claim that the former president married the reality TV star. Therefore, the claim is misleading.

This story is published in partnership with Report for the World, a global service program that supports local public interest journalism.